I usually design my [Python][python] programs so that if a program needs to read or write to a file, the functions will take a *filename* argument that can be either a path string or a file-like object already open for reading / writing.

(I think I picked up this habit from [Mark Pilgrim’s Dive Into Python][dive], in particular [chapter 10 about scripts and streams][chap10].)

This has the great advantage of making tests easier to write. Instead of having to create dummy temporary files on disk I can wrap strings in [`StringIO()`][stringio] and pass that instead.

But the disadvantage is I then have a bit of boiler-plate at the top of the function:

You could set a flag when opening the file, and then close the file afterwards if the flag is set, but that is yet more boiler-plate and quite ugly.

If you always want the file to be closed on leaving the block you use the *closing* keyword argument set to `True` (the default of `False` means the file will only be closed if it was opened by the context manager).

Today is my brother’s birthday. If I had asked him what he wanted for a present I am pretty certain he would have asked for a blog post about closing files in a computer programming language.

Someone was asking on [Flask][flask]’s IRC channel [#pocoo][irc] about sharing templates across more than one app but allowing each app to override the templates (pretty much what [Django’s TEMPLATE_DIRS setting][django] is for). One way of doing this would be to customise the Jinja2 template loader.

Here’s a trivial Flask app that searches for templates first in the default folder (‘templates’ in the same folder as the app) and then in an extra folder.

The only thing special here is creating a new template loader and then assigning it to [the `jinja_loader` attribute on the Flask application][attr]. [`ChoiceLoader`][choice] will search for a named template in the order of the loaders, stopping on the first match. In this example I re-used the loader that is created by default for an app, which is roughly like `FileSystemLoader(‘/path/to/app/templates’)`. There are [all kinds of other exciting template loaders available][loaders].

I really like the fact that Flask and Bottle’s APIs are so similar. Next I want Flask to include [Bottle’s template wrapping decorator][view] by default (there’s [a recipe in the Flask docs][templated]) and for both of them to re-name it `@template`.

Marcel Hellkamp [recently added a small feature][3] to Bottle that makes it easy to inspect an application’s routes and determine if a particular route is actually for a mounted sub-application.

([Bottle is a small module written in Python for making websites][4].)

Route objects (items in the `app.routes` list) now have extra information when the route was created by mounting one app on another, in the form of a new key `mountpoint` in `route.config`.

Here’s a trivial app with another app mounted on it:

And a utility function that returns a generator of prefixes and routes:

Finally, inspecting all the routes (including mounted sub-apps) for the root Bottle object:

This new feature is sure to revolutionise everything.

I wrote a blog about [generating Mac-compatible zip files with SharpZipLib][1], the conclusion of which was to disable Zip64 compatibility. It was wrong, *wrong* I tell you.

The better solution is to just set the size of each file you add to the archive. That way you can keep Zip64 compatibility and Mac compatibility.

I owe this solution to the excellent SharpZipLib forum, [which covered this problem a while ago][2], but which I missed when I wrote the earlier blog.

Here’s an updated version of the zip tool in C# that makes Macs happy without annoying anyone else:

TL;DR When creating zip archives with SharpZipLib disable Zip64 format if you care about Mac compatibility.

Extra TL;DR [When creating zip archives with SharpZipLib make sure you set the file size][redux], disabling Zip64 is neither here nor there.

A project I am working on sources a zip archive from a Web service, extracts the XML file from the zip and then does silly amounts of processing of the data in that XML to produce a new XML file which is returned to the user.

Fortunately the developer of the Web service is very helpful (the service is written in C# and runs on Windows) and although he didn’t know why Macs were having problems (the built-in Windows zip tool can handle the archive fine) he showed me the code that creates the zip file.

Turns out they were using [SharpZipLib, an open-source library for C#][sharpziplib]. And it turns out SharpZipLib creates archives using [Zip64 format][zip64] by default.

The fix was to disable Zip64 when creating the archive. Here’s a trivial command-line program that creates a zip and disables Zip64 for Mac compatibility:

The advantage of disabling Zip64 is you make me and all my Mac-using hippy friends happy. In concrete terms, disabling Zip64 makes it more likely I will buy you a drink.

Also many thanks to the maintainer of NAnt in [MacPorts][macports], who responded to [my bug report][bug] and pushed an updated NAnt to MacPorts extremely quickly. Although SharpZipLib doesn’t officially support [Mono][mono], it builds without a hitch using the “build-net-2.0” target if you hack the `SharpZlib.build` NAnt script like so:

Also thanks to the Mono project! Saved me having to fire up a Windows virtual machine to figure out this problem.

This article about using xlwt to generate Excel in Python reminded me I needed to see exactly how to set column widths (the xlwt documentation doesn’t cover it).

Let’s create a new Excel workbook and add a sheet:

We need to get a column in order to set its width. You do that by call col() on the sheet, passing the column’s index as the only argument (or row() for accessing rows):

The index is zero-based. You can fetch a column even if you have not written to any cell in that column (this applies equally to rows).

Columns have a property for setting the width. The value is an integer specifying the size measured in 1/256 of the width of the character ‘0’ as it appears in the sheet’s default font. xlwt creates columns with a default width of 2962, roughly equivalent to 11 characters wide.

For rows, the height is determined by the style applied to the row or any cell in the row. (In fact rows also have a property called height but it doesn’t do what you want.) To set the height of the row itself, create a new style with a font height:

Setting the style on the row does not change the style of the cells in that row.

There is no obvious way to set a default width and height for all columns and rows. An instance of xlwt.Worksheet.Worksheet has properties for col_default_width and row_default_height but changing those does not actually change the defaults.

The problem is that new columns are always created with an explicit width, while rows take their height from the style information.

My first attempt at setting defaults set the width on every column and the height on every row. It works, but creates 65,536 unnecessary empty row objects.

A slightly better approach is to set the width on every column and to set the font height on the default style record in the workbook:

Here I used itertools.count() and wrapped the loop in a try block so I can forget exactly how many columns are permitted. When the loop tries to access a bad index it will throw ValueError and the loop will exit.

You mustn’t replace the default style on an instance of xlwt.Workbook.Workbook, you have to update the property of the existing style (to ensure you are changing the first style record). Unfortunately there is no way to set a default column width (as of xlwt version 0.7.2) so the brute force method of setting every column will have to do – it isn’t so bad since there are only 256 columns.

Talking of widths and heights, have you heard "Widths & Heights" by Magic Arm? Is good.

Interesting [InDesign][indesign] problem: the format for a modification date variable changes per document.

*(This post describes a problem using Adobe InDesign CS4 but applies just as well to CS5 and CS5 and a half.)*

Suppose you have a text frame containing the [file modification date variable][variable], created using *Type* → *Text Variables* → *Insert Variable* → *Modification Date*, displays as “14 September 2011 7:50 PM” (on my system). Now open an existing document that was created on a different system and copy and paste the text frame containing the date variable. But depending on what system created the other document the date displays using a different format, e.g as “September 14, 2011 19:50”.

Workaround: define a new / custom text variable that uses the file modification time but with your own explicit format, then insert your custom variable instead of the pre-defined “Modification Date” variable.

In my brief testing this custom variable and its format is preserved when pasting the text frame into other documents that were created on other systems.

So I gave up. I will leave the investigation for some day when I am younger and it is more important to understand how Adobe’s InDesign picks the format for the built-in date modified variable. The workaround works around.

[Two years ago][old] (flippin’ heck it seems like only yesterday) I wrote about converting between Unix timestamps and Windows timestamps using Python. In that post I linked to my very simple implementation of a module that provides converting back and forth between the formats.

A few weeks ago I received an e-mail from Timothy Williams with changes to the my module so that it preserves the fractions of a second in the conversion. How sweet is that?!?!! Exclamation mark question mark exclamation mark cellida diaresis em-dash full stop king of punctuation.

It is fantastic that not only did someone find my code useful but also that they were generous enough to take the time to improve it and give the changes back to me. I love tasty, delicious free software and the people like Tim who make it tastier and more delicious.

So here is the new version of [filetimes.py incorporating Tim’s fixes][ft].

Parsing an XML document and selecting the context node with ElementTree in Python 2.5:

Parsing an XML document and selecting the context node with cElementTree in Python 2.5:

However! I have a kludgey work-around that works whether you use ElementTree or cElementTree. Use `’./’` instead of `’.’`:

*Kludgey because `’./’` is not a valid XPath expression.*

So we are back on track. Also works for Python 2.6 which has the same version of ElementTree.

Fortunately Python 2.7 got a new version of ElementTree and the bug is fixed:

However! They also fixed my kludgey work-around:

So I can’t code something that works for all three versions. This is annoying. I was hoping to just replace ElementTree with the C version, makes my code run in one third the time (the XML parts of it run in one tenth the time). And cannot install any compiled modules – the code can only rely on Python 2.5’s standard library.

I’ve installed [Mac OS X 10.7][lion] (upgrading from 10.6) and was very interested to see how the new search tokens feature would work in Spotlight. But on my Mac it doesn’t. Here’s the result of a search for files whose name contains the text “david buxton”: 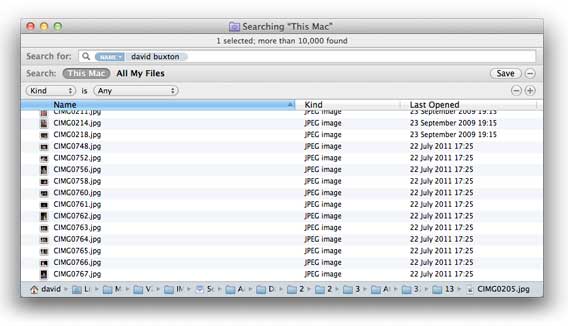 Note how none of the files in that list has a name containing the text “david buxton”.