Interesting [InDesign][indesign] problem: the format for a modification date variable changes per document.

*(This post describes a problem using Adobe InDesign CS4 but applies just as well to CS5 and CS5 and a half.)*

Suppose you have a text frame containing the [file modification date variable][variable], created using *Type* → *Text Variables* → *Insert Variable* → *Modification Date*, displays as “14 September 2011 7:50 PM” (on my system). Now open an existing document that was created on a different system and copy and paste the text frame containing the date variable. But depending on what system created the other document the date displays using a different format, e.g as “September 14, 2011 19:50”.

Workaround: define a new / custom text variable that uses the file modification time but with your own explicit format, then insert your custom variable instead of the pre-defined “Modification Date” variable.

In my brief testing this custom variable and its format is preserved when pasting the text frame into other documents that were created on other systems.

So I gave up. I will leave the investigation for some day when I am younger and it is more important to understand how Adobe’s InDesign picks the format for the built-in date modified variable. The workaround works around.

This way you can subscribe to a list of recent updates in your favourite news reader and be informed when a new update is released without having to scan product-specific blogs, etc.

When you want to find an update for a product you can find it on the dedicated product update page. It will be there.

Anyway, those be my principal beefs with the current Adobe software updates site. So I made a site that tries to satisfy my beeves. Beefs.

This is written from the point of view of someone looking to keep abreast of software patches for [Adobe][adobe]’s many excellent products (also Acrobat).

Adobe’s [Downloads page][downloads] is mostly about downloading product demos. Although on that page there is a list on the side with a link to the real product updates page and a very out-dated list of updates.

So then the actual [Product Updates page][updates] has a menu for all their products that takes you to the updates for an individual product, and a list of “featured updates”. What qualifies an update to be featured is a mystery, so that list is not useful either.

They don’t think to mention it on the Downloads or Product Updates pages, but there is also a [New Downloads page][new] which is actually rather handy, although there is no indication what constitutes “new” so it can be difficult to tell if something was released in the time between your last visit and the oldest update mentioned on that page.

I have been poking at [Adobe][adobe]’s support pages recently. They have RSS feeds to which you can subscribe in order to learn when [new support documents have been published][rss]. Today I happened to refresh the feed in those moments before someone bothered to proof-read what they were publishing.

> Please do not publish this doc without checking with Anita. I’m in the process of reviewing and editing it. Thanks. AnitaWhat’s coveredIntroduction to the GPUGPU features in Photoshop and Adobe Bridge…

Here’s how it looked in [NetNewsWire][nnw]: 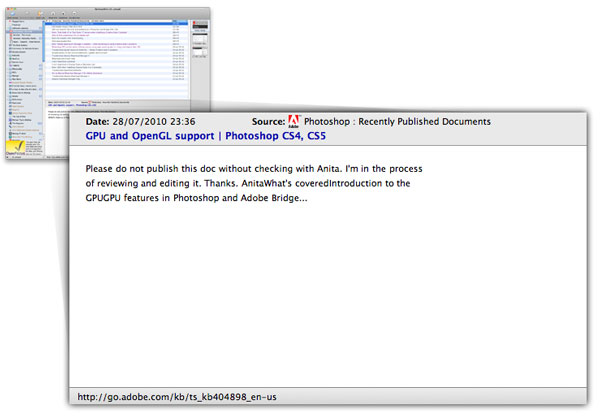 Those run-together words in the feed are a fair example of the lack of attention to detail in the design of [the Adobe support site][support]. There’s good stuff on there, but finding it is frustrating and anyway wouldn’t you rather download a demo of something with [motherfucking Akamai download manager][akamai]?

Meanwhile Anita must have said to go ahead because [there’s no mention of her on that article’s page now][kb].

[Pierre Igot][igot]’s post about [Adobe’s use of a new cursor in CS5][cs5] draws attention to how Adobe is continuing to fail to adhere to Macintosh user interface conventions.

But I disagree that the correct cursor to use for a blocking task that cannot be cancelled is the spinning beachball of death. That cursor after all is the cursor automatically provided by the operating system when an application is _not responding to input events_. As such when I see the beachball I associate it with a stuck application, one that may need to be forcibly quit.

Previous versions of Photoshop showed the watch cursor for actions which took a significant length of time. Showing the watch cursor is friendlier than showing the beachball of death because it indicates that the application is busy, too busy to handle your clicks but everything is hunky dory and the train _will_ arrive at the station.

There is no watch cursor listed in [Apple’s documentation on cursors][cursors]. However the cursor is still present in the system and can be found in the headers for the carbon appearance manager:

I don’t know enough about Macintosh programming to say whether it is possible to employ this cursor from a Cocoa-based application.

[Adobe][adobe]’s installers and updaters for the Creative Suite are amazingly bad. The updaters actually create a hidden directory `/Applications/.AdobePatchFiles` and store what I assume are the old versions of the files that get updated. Almost a gigabyte of data on my system!

What the fuck is wrong with [these guys][oobe]?

Not certain which is worse, that the updaters created a folder in `/Applications` that clearly belongs somewhere in `/Library/Application Support` (if it should exist at all) or that they made it hidden.

You can delete it.

Looking through the updaters for [Adobe Acrobat][acrobat] 9 for Mac I came across a bunch of scripts written in [Python][python]. My favourte was called `FindAndKill.py`:

def main():
if len(sys.argv) != 2:
print ‘Missing or too many arguments.’
print ‘One argument and only one argument is required.’
print ‘Pass in the app name to find and kill (i.e. “Safari”).’
return 0

(You can [download the Acrobat 9.1.3 update][acrobat913] and find this script at `Acrobat 9 Pro Patch.app/Contents/Resources/FindAndKill.py`.)

Was the author not aware of the `killall` command for sending a kill signal to a named process? The [`killall` man page][mankillall] says it appeared in [FreeBSD 2.1, which was released in November 1995][fbsd]. Adobe CS4 was [released about 14 years later][cs4]. How is it Adobe’s product managers approve these things for release?

What is particularly galling about Adobe’s Acrobat 9 updaters is that they seem to re-implement so much of what the Apple installer application does, even down to their use of gzipped cpio archives for the payload.

The installation process begins. Finally it finishes. Afterwards I had Illustrator CS4, InDesign CS4, Photoshop CS4 and Bridge CS4 installed on my Mac’s hard drive. They all worked a treat.

I also had a dog’s dinner of all the other flipping applications installed, all the applications I did not want to install, I had little vomit stains of Adobe installations that didn’t quite actually install, but installed. 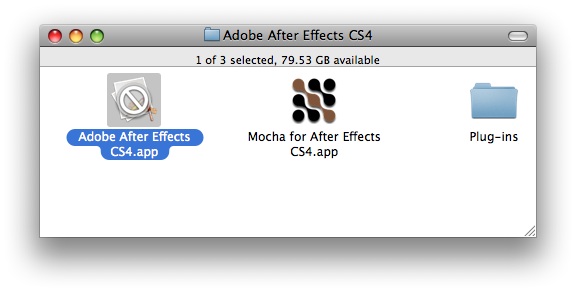 I wish the Adobe CS4 installer had just done what I asked for. [The Adobe installation and licensing blog is here][oobe].

An amusing sentence from the first chapter of *[AppleScript The Definitive Guide][oreilly]* by Matt Neuberg:

> To find reasons to use AppleScript, just leave your mental annoyance meter turned on.

But don’t forget to switch off your brain once you do start using AppleScript; the frustration of getting anything done with the miserable Macintosh applications that expose their workings via AppleScript never fails to kick my mental annoyance meter into the red.

The following paragraph employs sarcasm. I’ve just being having a wonderful time figuring out that [Adobe InDesign CS3][adobe] keeps the list of items on a page sorted by layer, but sorted in reverse layer order and then sorted forward within each layer. This makes it super sweet when you want to determine if box A in layer 1 overlaps box B in layer 2. Thanks Adobe! Another genius implementation from you guys! You guys fucking rock!

And it isn’t just the fault of the applications you want to script, the language itself is intentionally imprecise in trying to allow programs to be written in natural language. “Whether this English-likeness is a good thing is debateable,” writes Matt Neuberg, but he is being polite because if there is any debate on this question it is a fucking short debate: AppleScript’s English-likeness only serves to have you make mistakes with more confidence.

There is an interesting [history of AppleScript][history] which tantalizes the present-day scripter with the revelation that the language authors wrote a syntax “which resembled Java” but never released it, preferring to support scripts written in fucking French and fucking Japanese!

[Tweetdeck][tweetdeck] seems to be the path of least resistance for a desktop
[Twitter][twitter] client on Mac OS X 10.4 (there are other free Mac desktop
clients, [Nambu][nambu] and [Tweetie][tweetie] but unfortunately they both
require 10.5).

When you open the installer, it takes a few seconds and then gives you a
license agreement. Here’s an excerpt:

I read that as explicitly banning any efforts to create a package
to ease the pain of deploying AIR across a bunch of Macs. Damn it.

Clicking Accept moves you to the installation proper, and Adobe loses a few
more points by immediately throwing up an authentication dialog box. Why does
this dialog appear? What am I about to install? If only this was a package
installer I could have looked at the installation manifest to get an idea of
what was going to happen *before* granting the installer free rein to my
computer.

It feels particularly wrong when non-system applications put things in the `Utilities` folder – it is effectively a special system directory, and its contents are tools for tinkering with the system configuration or for diagnostics. Adobe Creative Suite 3 likes to create a folder `Adobe Installers` in there *and* `Adobe Utilities`, just in case you haven’t worked out how much you need their software on your computer.

Heaven is almost certainly running System 6.0.8. Nothing is installed without [Font DA Mover][fontdamover].